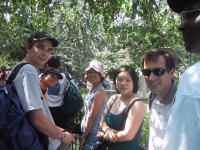 Man, there is nothing like a road trip to make you remember why it’s worth it to work so hard on the weekdays. a few of us headed south over independence day weekend…hitting up Disneyland, the Santa Monica Boardwalk portion of LA, and San Diego as major destinations.

highlights of the weekend included: 1) heart-racing driving on the most part by scott, always nimble in his good ole excursion which is actually much faster than it looks. Entertainment in its own right. 2) chasing fireworks through the city–no Independence Day is complete without them and as the evening got dark we were frantically looking for a place to park where we could get a good view. It’s difficult when no one knows the area. I’ll never forget driving back to the hotel though, on one of the raised highways that cuts through the city, people’s homebrew firework displays going off to the left and right. 3) rollerblading down santa monica boulevard…just like out of 90210. The shopping wasn’t half bad either, scored some cheap but very hip (yes, it’s possible) sunglasses of the j-lo gradient variety. Oh, and scrapes and bruises all around. 4) Brazilian BBQ in the gaslight district of San Diego. So much meat should be sinful. I forget what my favorite kind was, but it was damn good. Plenty of pictures in my shiny new picasa web album.