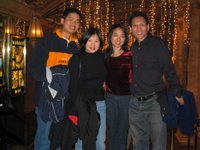 March 2003, I was still learning how to snowboard at this time and getting tutored by someone with personal incentives in me picking it up. 🙂 A few of us hit the slopes together, staying close to Reno during one night of the two day trip so that we could follow a frustrating day of falling on one’s butt by the exhilaration of winning lots of money! It was during this trip that I hit my head so hard on a fall I blacked out for a few seconds, scaring the people around me (although it was sort of cool riding the snowmobile down the mountain into the infirmary). I swear my memory hasn’t been the same since…but maybe that’s just old age?

We followed the trip with a group stop at Claimjumper’s–my first time. They have humungous portions, as is evidenced by this large-portion lamb shank. But the food is not half bad–comparable to max’s, but bigger.