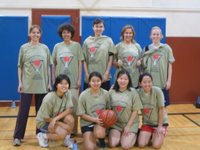 At some point after my gaming phase, I decided I needed to get outdoors more and I’d always wanted to know how to play basketball. I got a few friends of mine to join me, and we were matched with a bunch of free agents down in the Campbell beginners league. The team was called Swoosh. it was the first time playing organized ball for many of us, and we didn’t realize how uniquely talented the other girls on our team were. Specifically, our center was a russian model (and I mean runway, folks) named vallya, who I’m convinced I remember used to play for the russian national team or something. She was tall, graceful, and attracted so much attention in the block that the rest of us were open to take wide open shots.

Karen was our captain. A student at San Jose state, she was fiery but very patient with us, teaching us the most basic fundamentals about the game. She also used to throw these wicked lob passes down the court to me so that I could make fast breaks. We were fast back in the day, comparatively at least. In fact, one team in particular commented in a nasty fashion that we were “too young for this league”. It was as close to brawling I’ve ever gotten. Tracy and Teresa were two other adept and friendly players. Tracy, I remember, played our last games of the seasons and then broke the news she was a few months pregnant! And then there was Laura. Laura stayed with us after the campbell league had ended, through the brief forays we had in Menlo Park/EPA, to our current home in San Carlos. Always enthusiastic, and always opinionated.

My dad happened to catch our last game of the season, the championship, which we won!! i made two fast breaks, and c and the crew said he was going nuts on the sidelines. In my family, none of us are all that althetic, so he was very surprised. My mom told me later he went home and said, “s plays basketball, and surprisingly she’s pretty good!”